To demonstrate its commitment to global education, Eckerd College sponsors semester and year study abroad opportunities for its students. In addition to Eckerd faculty-led programs, students have the opportunity to participate in reciprocal exchange programs as well as in programs sponsored by Eckerd affiliates. 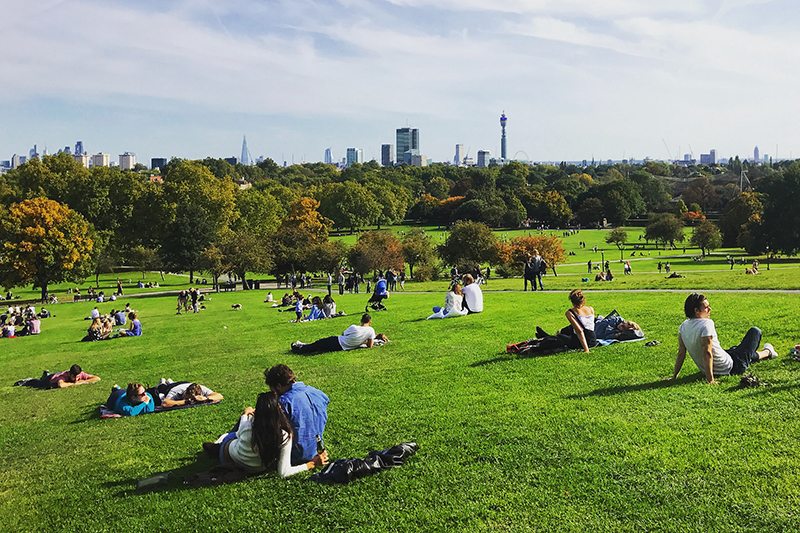 The British Seminar is required and satisfies the Global Perspective. Classes meet once weekly, leaving time for you to explore London on your own and creating great opportunities for travel throughout the UK and to the Continent.

This course will follow the twists and turns of the history of Western medicine in London.  From unbalanced humors to poisonous vapors to the discovery of microorganisms and through to more recent developments in holistic medicine, we will examine the varied beliefs and practices involved in understanding and treating illness throughout time.  Our explorations around London will include visiting collections of native medicinal plants at the Royal Botanic Gardens, viewing 19th century operating theatres  where surgeries were preformed without anesthesia or antiseptics, and following in the footsteps of John Snow as he mapped the 1854 cholera outbreak and eventually traced the source of contamination to one drinking water pump.  This course will focus on experiential discovery of advancements in medicine but also question the notion that the evolution of medicine has moved in one direction only.

This course will look at the ways British colonialism transformed cuisines and ecosystems across the planet and how the legacy of colonialism is reflected in the food culture of contemporary London.  Through visits to gardens, markets, museums, and restaurants around the city, we will trace the movement of people, plants and ideas around the globe in an effort to understand the complex cultural and ecological exchanges brought about through the colonial experience.

Only two blocks away from the British Museum and within walking distance of Trafalgar Square, the National Gallery, Covent Garden and Soho, the centre is in the best location in London.

This neighborhood, full of beautiful trees and parks, just five minutes walk from the bustling West End, is London’s premier location for many leading national and foreign educational institutions.

The British Museum, University of London, British Library and University College London are complemented by many prestigious overseas teaching organizations which have made Bloomsbury their location of choice.

The area is strategically situated, and offers extensive public transportation by underground and bus to all parts of London, the suburbs, and Heathrow airport.

A History of Learning

In medieval times, Bloomsbury was the site of a manor house, ‘Blemondsisberi’ owned by William Blemond. The property passed to Edward III in 1390, and then to the stewardship of Carthusian monks. During the dissolution of the monasteries instigated by Henry VIII, possession again returned to the Crown before the estates was to the Lord Chancellor, Thomas Wriothesley.

The area began to be developed in the 17th Century when Bloomsbury Square was completed, setting a precedent for subsequent development. Bedford Square, completed in 1783 is the capital’s finest Georgian garden square, widely regarded as one of England’s greatest contributions to the development of European town planning.

Bloomsbury became extremely fashionable during the 18th Century, when many imposing townhouses were built for families who spent the week in town and the weekend relaxing in the country. The British Museum, founded in 1753 to display the world’s and nation’s cultural heritage, is an international centre for study and research. Since the recent construction of the Great Court to celebrate the millennium, the museum now houses London’s largest covered public square.

Complementing the primarily residential architecture of Bloomsbury, more public buildings began to appear in the 19th Century, most notably The University College London, established in 1826; the first of a number of University of London facilities to be built in the area which confirmed Bloomsbury as the scholastic centre of the capital.

The Bloomsbury Group, an intellectual circle of friends, flourished in the 1920s and included the artists Duncan Grant and Vanessa Bell, the writers Virginia Woolf and Lytton Strachey and the art critics Roger Fry and Clive Bell. Bertrand Russell, Aldous Huxley, and T.S. Eliot were also associated with the group as was John Maynard Keynes, one of the most influential economists of the 20th Century.

Special thanks to MB&A and The Bedford Estates.

The program is led by a different Eckerd College faculty member each semester. This Director lives at the centre with the students and teaches (at least) one course, the British Seminar. Other courses are taught by British faculty.

The British Seminar is a required course for all students. It provides students with a good historical and cultural overview of Britain. One week of travel during the semester is devoted to the content of this course.

Financial aid for students participating in the London program remains intact, with the exception of work study; students have full benefit of federal, state, and institutional aid.

Periodically the college also offers semesters in China and in Latin America led by Eckerd faculty.

For each of these programs, all financial and institutional aid applies, with the exception of work study. Additional loans may also be available.

Courses offered in English and Spanish with a focus on Marine Science.

"I'm so thankful for all the opportunities that Eckerd has given me. I've been abroad twice and this spring break I'm traveling to Cuba for a service-learning trip. I never would have had all these great opportunities if I hadn't come to Eckerd!"