She doesn’t know her major yet, but Sally Gardiner-Smith has figured out a lot of other things. 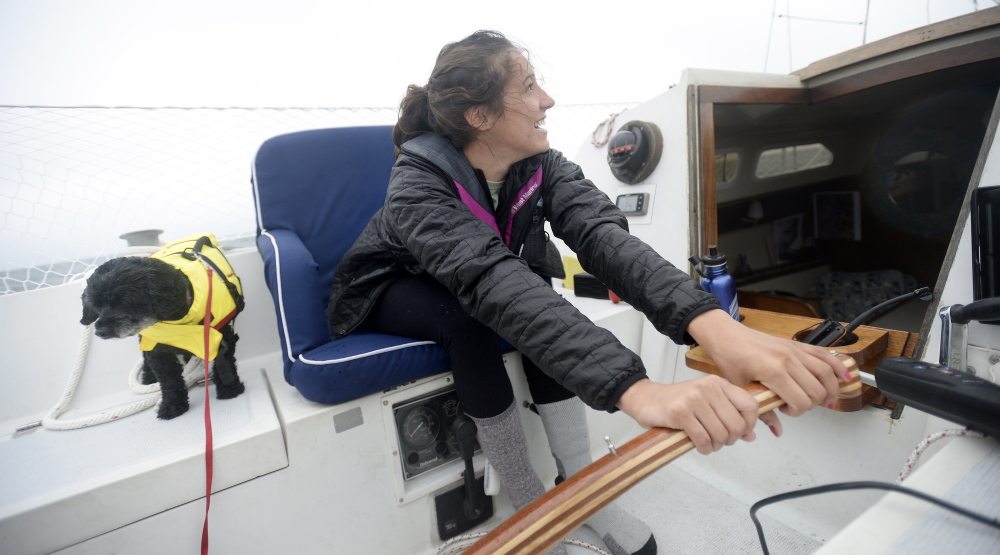 Big things. Things like what’s she’s capable of doing and what’s really important and what she wants to do with her life.

Spending nine months and 3,000 miles sailing solo from Maine to Eckerd College gives you a lot of time to think about things like that.

Sally, who set sail Sept. 29, 2014, from Portland, Maine, is now comfortably ensconced on dry land, settling in at Gamma Residence Complex with her cockapoo Elli and reading Plato. She is getting acclimated as a first-year student, Class of 2019, one of about 500 first-year students enrolled in Autumn term.

Her 29-ft. boat Athena, meanwhile,  is in dry storage at Salt Creek Marina just south of downtown St. Petersburg, awaiting the next adventure.

And there will be more adventures, Sally says. That’s one of the big things she figured out on her long journey. She’s a sailor, and that’s not going to change.

Of course, there were a few challenges along the way. There was the time when the rope got snarled in the propeller and she had to dive into chilly waters to untangle it.  Or the month she was grounded awaiting parts for the boat (though she was in the Bahamas so it could have been worse). There were the occasional bouts of the lonelys prompting her to head to shore for some human contact.

But the worst thing that happened was when Elli got away from her while on land and was hit by a truck, crushing her right hind leg. The leg had to be amputated and Elli spent a long stretch back in Maine recuperating.

“Sailing without Elli was hard,’’ Sally recalls. She also had to deal with feelings of guilt, blaming herself for letting her run free instead of tethered to a leash. But Elli seems to have recovered nicely, walking briskly on three legs. And she’s always on a leash.

Being alone took some getting used to, she says. “At first I didn’t like it,’’ Sally recalls. “I would go ashore just to find someone to talk to.” But after a while, she says, “I developed an appetite for it…It was really nice.”

She never had any moments when she felt uncomfortable or scared. In fact, she learned how friendly and supportive the sailing world really is. “I met so many amazing people,” she says. She stopped at several places along the way, including Charleston, Ft. Lauderdale and the Bahamas. Her dad joined her on the trip from Ft. Lauderdale to the Bahamas, where she met up with old family friends. She spent Christmas back home in Maine. She also blogged about her trip for her hometown paper, the Portland Press Herald.

Sailing is hardly new to Sally. She grew up on a sailboat. She was almost born at sea when her parents were sailing near the Chesapeake Bay and was back on the boat with them when she was six months old.

But this gap-year trip was like no other. “I learned what I’m capable of and how much I can do when I really have to do it,” Sally says, such as rewiring the running lights on the boat.

She also figured out what she values most: ”Working should help you have the means to live your life how you want to live it, rather than work being the most important thing.”

Now she’s on another journey at Eckerd. She arrived in St. Petersburg July 21, spent a few days prepping the boat for storage and then a couple of weeks back home before returning in time for the Aug. 7 start of Autumn term.

Like her fellow first-year students, Sally is learning her way around campus, meeting with her mentor, Political Science Professor Tony Brunello, and taking his course on Politics and Imagination. She’s also getting readjusted to being around so many people again. The cafeteria seems crowded, and there are still hundreds of sophomores, juniors and seniors yet to arrive for the start of the Fall Semester on Aug. 31.

“I’m excited for everyone else to get here,” she said.

“I loved how hands on the laboratory work was! Not many schools can say they go out in boats to collect organisms and data to bring back to school for further research! Or just go out on a boat, use a trawl to catch organisms, identify them, and throw them back into the Bay!”
– Cassandra Berntsen ‘15
Title, Employer