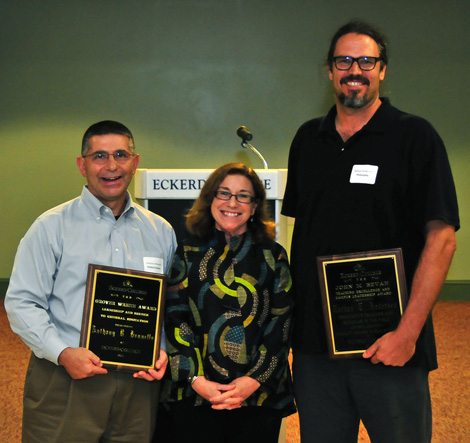 The Bevan award is named for Eckerd’s founding academic dean and honors individual faculty members for nurturing a campus climate that fosters teaching at its best. The Wrenn award is named for founding alumnus and longtime Trustee Grover C. Wrenn ’64 to honor a faculty member who appreciates the enduring works of civilization and the value of their study to the development of the whole person; perpetuates a strong interdisciplinary general education curriculum in the liberal arts tradition and focused on value questions; and espouses Jack Bevan’s philosophy that the curriculum should provide for “the engenderment of a wholesome and critical enthusiasm for inquiry and reflection that will extend beyond the period of formal education.”

The awards were presented during the reception on Friday, Sept. 19 at Fox Hall by Dean of Faculty Suzan Harrison. The following citation was presented to Professor Andersen and Brunello:

For your passion to make film a central medium of the liberal arts at Eckerd College;

For your leadership in founding and directing the International Cinema Series, bringing films from across the globe and across cultures to Eckerd College and the larger St. Petersburg community;

For your vision in developing the College’s Film Studies minor by coordinating existing curricular offerings in film, developing new courses in film and philosophy, and co-authoring the proposal to create the minor;

For co-authoring the successful the National Endowment for the Humanities Challenge Grant that allowed us to create a new faculty position in Film Studies;

For your leadership in developing the successful proposal to create a major in Film Studies;

For co-directing the “Visions of Nature/Voices of Nature” Environmental Film program for eight years;

For transforming your research and teaching of film and philosophy at Eckerd College into the critically acclaimed book, Shadow Philosophy: Plato’s Cave and a Clockwork Orange;

For your ongoing creative and challenging teaching in the fields of Philosophy and Film Studies;

And for serving as a model of the talented teacher–scholar throughout your tenure at theCollege.

For passionately advocating the crucial importance of mentoring in the first-year program;

For your lectures in response to the question “What Is Power?” that take our first-year students on a journey of exploration through Plato’s Republic, Machiavelli’s The Prince, John Lennon’s “Imagine,” and Francis Ford Coppola’s “The Godfather;”

For your leadership in integrating the global dimension into the College’s first-year corecurriculum, thereby introducing students to the ethics of Mencius, the beauties of the Ramayana, and the mysteries of the Tao te Ching;

For your scholarly work on the importance of a strong core curriculum to an excellent liberal arts education and for spreading the word about Eckerd College’s core curriculum through your numerous conference presentations on general education;

For teaching in the general education program too many times to count in the course of your career at Eckerd College and for mentoring your colleagues who are teaching in the freshman program for the first time;

For your trademark combination of humor and humility that infuses your work with your colleagues and your students;

And for your ability to fashion inventive, culturally significant lyrics for well-known tunes to celebrate our community,

Eckerd College presents the Wrenn Award for Leadership and Service to General Education to Anthony Brunello, Professor of Political Science.