Freshman’s excuse for missing class is one to remember

Professor Laura Wetzel has heard a lot of excuses over the years for why a student had to miss class.

But this was a new one.

Jesie Felipe was going to become a U.S. citizen. The swearing-in would take place in Tampa, so she was going to have to miss Wetzel’s Geological Oceanography class.

For Jesie, an 18-year-old freshman who was born in the Philippines to a Filipino father and a Japanese mother, becoming a citizen was more convenience than anything else. She’s lived in the U.S. since she was 3 or 4 years and has always felt like an American. “At this point I basically lived as one,” she says. She says she never suffered from any sort of discrimination. 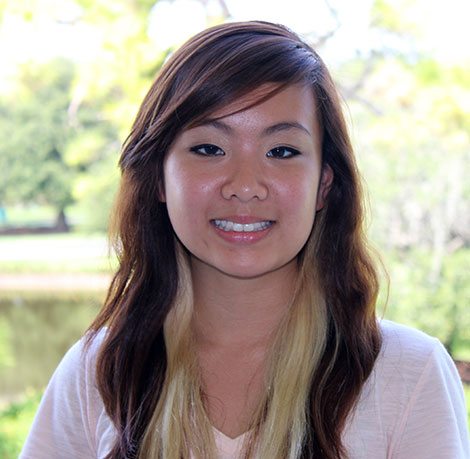 But now she will be able to vote and travel with a U.S. passport. Things will be easier.

Her parents wanted her to decide the question of citizenship herself. “Like my mother, I have  been a permanent resident with a green card for most of my life,” she says. “We chose to file for citizenship shortly before I turned 18 for convenience—the process is different for a minor and much simpler.” Her parents live in Wesley Chapel.

Months after she applied, Jesie was told that her application had been accepted and that she could turn in her green card and be sworn in as a U.S. citizen.

Wetzel says attendance isn’t mandatory for her class but it’s strongly encouraged and it was the only time Jesie has missed class. “It’s important for them to be there,” she explains.

But becoming a citizen is a big deal. “I think it’s wonderful,” Wetzel says. “I brought brownies to class and everybody celebrated and clapped. We were all happy to enjoy the moment with Jesie.”