Humanitarians Elie Wiesel and John Prendergast Pair Up for “From the Holocaust to Darfur: If We Had Only Learned Our Lesson” 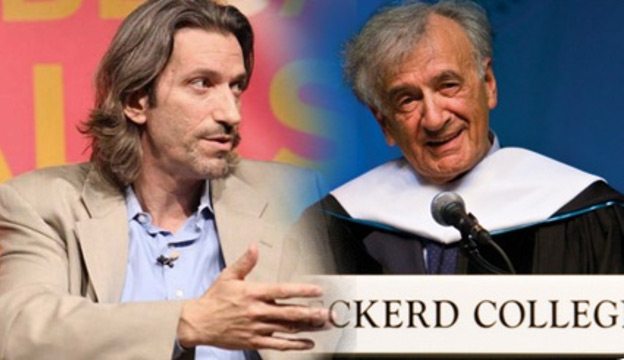 The Holocaust. Cambodia. Bosnia. Rwanda. And now Sudan. Elie Wiesel, the author of Night and a recipient of the Nobel Peace Prize, will join John Prendergast, a human rights advocate and co-founder of the anti-genocide Enough Project, for “From the Holocaust to Darfur: If We Had Only Learned Our Lesson” on Thursday, March 11 at 7:30 p.m. at the Progress Energy Center for the Arts – Mahaffey Theater (400 1st Street South, St. Petersburg). This talk is a featured event of The Plight and Promise of Africa: An Eckerd College Initiative.

This event is free and open to the public. All tickets have been distributed for this event. To be added to a Wait List for tickets, please visit the Contact page.

Lasting over two decades, Sudan’s second civil war between the North and South has resulted in the deaths of an estimated 2 million people, displaced more than 5 million others and caused a quarter of a million Darfuris to flee to refugee camps in eastern Chad. An ongoing conflict in the western region of Darfur was marked by a period of intensive, systematic targeting of the civilian populations from the Fur, Zaghawa and Masaalit ethnic groups. In September 2004, the U.S. government declared the conflict in Darfur a ‘genocide’.

When Prendergast last spoke at Eckerd in March 2009, his visit coincided with Sudanese President Omar al-Bashir’s arrest warrant by the International Criminal Court (ICC) for war crimes and crimes against humanity in Darfur. What has happened since? The U.S. special envoy to Sudan has served in his post for nearly one year. The Comprehensive Peace Agreement between the Sudanese government and the Sudan People’s Liberation Movement reached its fifth anniversary in January. In February, the ICC reconsidered a charge of genocide against al-Bashir. And this April, Sudan will host its first multiparty presidential and legislative elections in almost a quarter of a century. How are these issues interconnected?

Elie Wiesel has been a Distinguished Visiting Professor of Humanities at Eckerd College since 1993. He is the author of Night (Oprah’s Book Club), a memoir about his experiences during the Holocaust that has since been translated into more than thirty languages. For his literary and human rights activities, he has received numerous awards including the Presidential Medal of Freedom, the U.S. Congressional Gold Medal and the Medal of Liberty Award, and the rank of Grand-Croix in the French Legion of Honor. Elie Wiesel won the Nobel Prize for Peace in 1986, and soon after, he and his wife, Marion, established The Elie Wiesel Foundation for Humanity, created to fight indifference, intolerance and injustice. President Barack Obama recently presented Elie Wiesel with a National Humanities Medal.

Elie Wiesel’s last public talk at Eckerd was given in February 2002, when he reflected on the events of September 11, 2001.

John Prendergast will be a Visiting Scholar-in-Residence at Eckerd College in March 2010. During the Clinton administration, Prendergast was involved in a number of peace processes in Africa while he was director of African Affairs at the National Security Council and special advisor at the Department of State. He has authored eight books on Africa, including “Not on Our Watch: The Mission to End Genocide in Darfur and Beyond,” a New York Times bestseller and NAACP non-fiction book of the year that he co-authored with actor Don Cheadle. In 2007, Prendergast co-founded the anti-genocide Enough Project based in Washington, D.C.

John Prendergast first spoke at Eckerd in March 2009. From March 1-13, 2010, he will participate in classroom discussions as well as give several public talks on the Eckerd campus and in the St. Petersburg community.