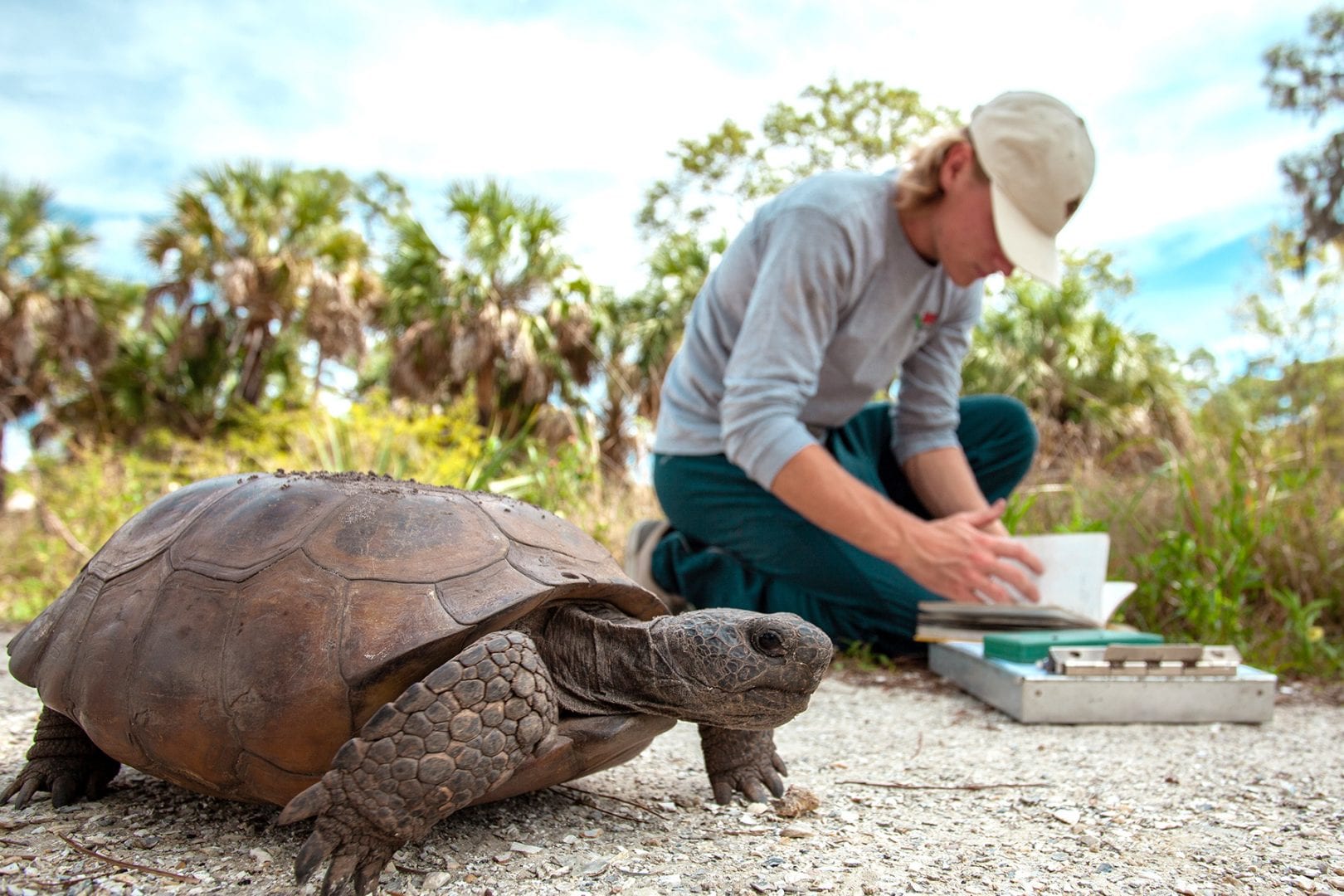 A gopher tortoise ambles by as a student researcher records data in a 245-acre preserve just a few miles from campus. Photo: Will Hawthorne ’21

Assistant Professor of Biology Jeff Goessling might very well prove there is more than one accurate way to determine the population of a species, thanks to a $2,500 grant from the American Wildlife Conservation Foundation Inc.

Goessling used the funds to purchase a burrow cam—a boxy, durable machine connected to a camera on the end of a long hose. He and his student researchers put the camera into burrows of gopher tortoises on St. Petersburg’s Boyd Hill Nature Preserve to see if anyone was home.

“There are multiple ways to count a species population. Two are mark and recapture, which basically is finding the animals and tagging them to keep count, and line transect, where you draw a straight line of a certain length and count the animals you see along that line and then use the number to estimate the total number of animals in the area,” Goessling explained.

Professor Goessling scouts the preserve with Bill Hawthorne and other student researchers to look for gopher tortoises. Photos by Daniel Basa ’20

Boyd Hill’s mark and recapture study was started by George Heinrich, a local herpetologist and owner of Heinrich Ecological Services. Eckerd’s Bill Hawthorne ’21, a junior biology and psychology student from Fairfield, Connecticut, did both mark and recapture and line transect with his fellow students in a 64-acre area of Boyd Hill this summer.

“The time it took depended on the day. When it rained, it was pretty miserable. It could be anywhere from two- to eight-hour days looking for tortoises,” Bill recalled.

The team encountered 129 individual tortoises that they have captured, marked and released; and they scoped 85 burrows, Goessling said. Conversely, they also have done 3.6 miles of line transects at Boyd Hill, and based on their observations, the formula estimates there are 129 tortoises on the preserve, Goessling said.

“That’s amazing because if it holds, it will prove that line transects (the faster method of population estimation) are just as accurate,” he explained.

Final study results will be presented in 2021 after the team has been able to count the animals with both methods in various seasons. Males travel long distances in mating season, and females can lay eggs long after mating, so seasonal counts are important.

Wildlife biologists are particularly concerned with the final tally because gopher tortoises are a keystone species; the effect they have on their native southeast U.S., long-leaf pine habitat is “disproportionately biologically diverse,” Goessling said. “Some 360 species depend on the gopher tortoise and its burrows, so if they disappear, it would have a tumbling effect on the ecosystem.”

Gopher tortoises are protected by the Endangered Species Act in other parts of the U.S. but have not been classified as such in Florida. Clearer population numbers will help the U.S. Fish and Wildlife Service make a final determination on their status.

Goessling said he’ll continue to work with Bill and his other research assistants—Owen Edwards ’21, Bjorn Peterson ’20 and Rachel Test ’21—as well as Eckerd’s Herpetology Club and several of his classes to complete the fieldwork, which has been made easier by the burrow cam.