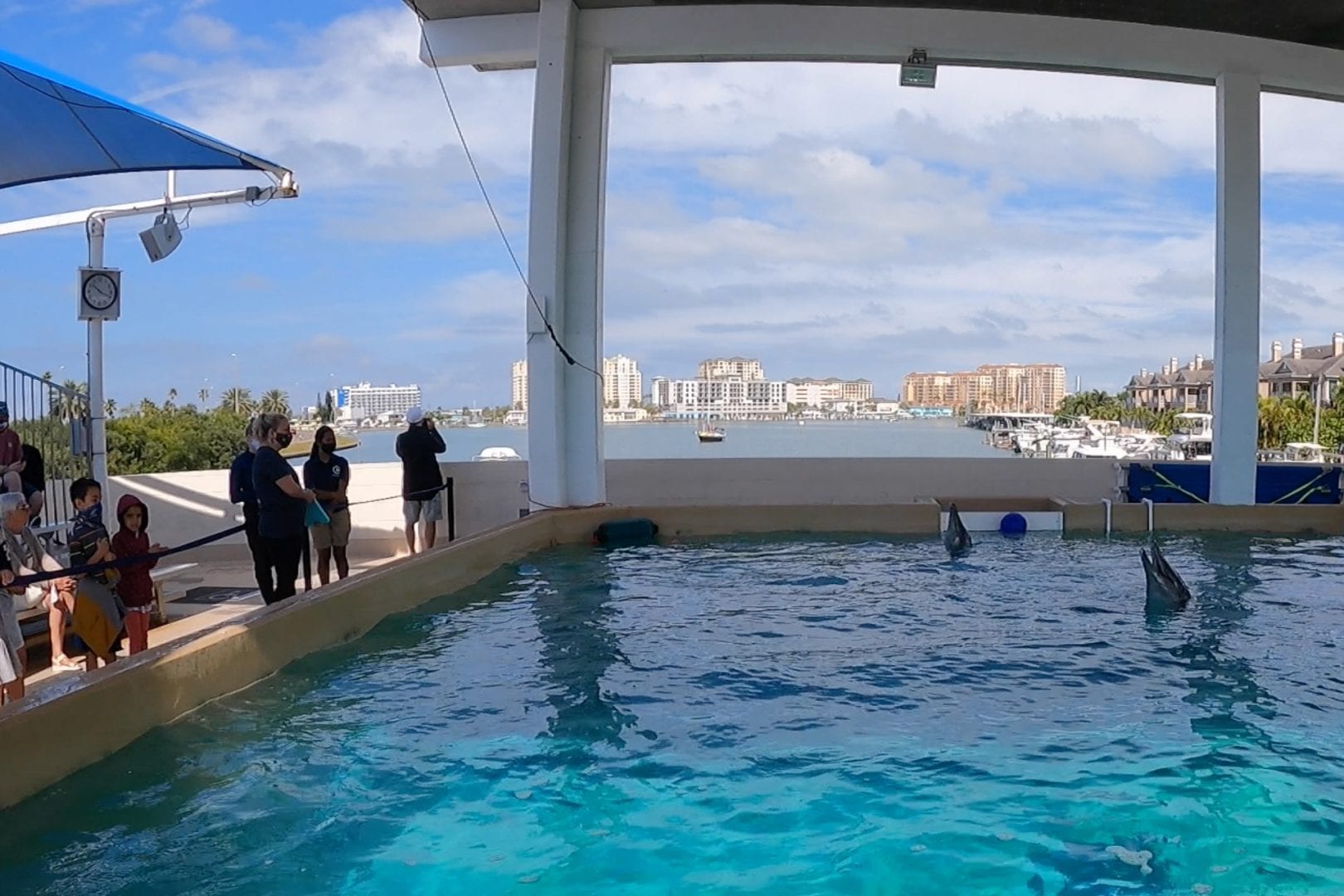 Trainers interact with a rough-toothed dolphin at Clearwater Marine Aquarium.

Rex—a rough-toothed dolphin, a species rarely found under human care—has the cutest vocalizations when he’s trying to get your attention, said Hailey McGovern, one of 11 Eckerd College students studying the animal at the Clearwater Marine Aquarium.

“I won’t say he’s my favorite,” admitted the first-year animal studies and psychology student from Highland Lakes, New Jersey. “They both have really big personalities. Rudy has his own charms.”

When the Clearwater Marine Aquarium acquired Rex (who had been stranded in the Florida Panhandle and rehabilitated at Gulf World) and Rudy (who had been stranded near Sanibel Island, Florida), Assistant Professor of Animal Studies Erin Frick, Ph.D., saw an opportunity to learn more about a species with very little available information because of its deep water habitat. Frick approached the aquarium with a research proposal in October 2020, and it was approved in December as the first-ever research collaboration between the Clearwater Marine Aquarium and a higher education institution. 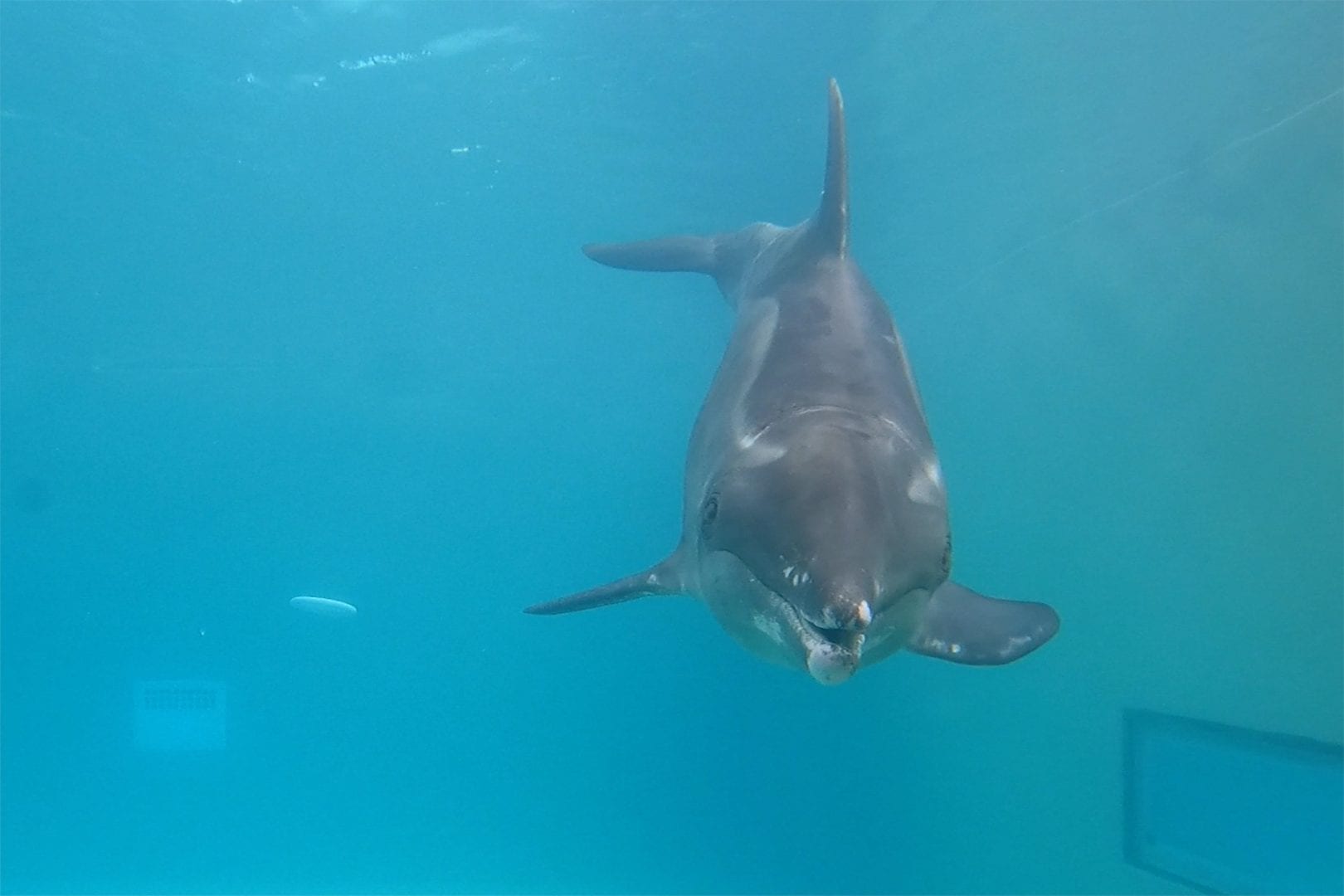 The two rough-toothed dolphins at the aquarium have been deemed unreleasable because of hearing loss.

“We’ve had individual researchers come in and do projects before but never an alignment with a college the way this research project with Eckerd is structured,” said Robin Curry, the aquarium’s animal care program manager and research committee chair. “I can’t rave enough about Dr. Frick and her students and how this has been going. Being the first is always sort of make or break, and this experience has us excited to collaborate more in the future.”

Hailey, one of the project’s two student co-leads, goes to the aquarium three times a week to observe Rex’s and Rudy’s daily routines, interactions, behaviors and preferences with several video cameras aimed at the tanks and an ethogram at the ready. As co-leads, she and Kerri Olzewski—a junior animal studies and psychology student from Wadsworth, Illinois—are responsible for uploading all the student-collected data to Frick’s research drives and making sure all the research shifts are covered.

“I didn’t imagine being in a leadership position like this as a first-year,” Hailey admitted. “I applied for the first-year research associateship with Dr. Frick’s lab and was immediately drawn to this when I saw the list of projects. I thought I’d be in the background pulling literature. Having the chance to do research like this is amazing.”

Frick said her student team began monitoring Rex and Rudy in February and have already learned a little about the animals—who had been deemed unreleasable because hearing loss had halted their ability to echolocate, a skill dolphins use to communicate, hunt and stay with their pods.

“They seem to be very into pec-rubbing. They will use their two pectoral fins on the sides of their bodies to touch one another,” Frick said. “It is showing us how they might be using touch to communicate.”

Two animals is a small sample size for a behavioral analysis such as this, both Frick and Curry explained, but because only two facilities in the country have access to rough-toothed dolphins, any new information gained from Rex and Rudy will deepen the knowledge of the entire scientific community.

“We have seven dolphins in total, two rough-toothed and five bottlenose,” Curry said. “Two of our bottlenose dolphins are also hard of hearing, so it would be wonderful if down the line we could do a study to find out how they sustained the hearing loss that made it impossible for them to survive in the wild.”

Until then, Frick’s team will continue studying Rex and Rudy through the summer and will conclude this research project in two years, Frick explained.

Hailey’s glad to be a part of a project that puts her one step closer to her dream of becoming an animal trainer. “I saw Dolphin Tale and fell in love. For my 12th birthday my mom brought me down to the Clearwater Marine Aquarium, and I’ve been hooked ever since. I met about a dozen animal care specialists who went to Eckerd College over the years, and my mom jokes that I chose my college when I was 8,” Hailey remembered. “Getting to do research at a facility I consider home feels fantastic.”