Establishing a baseline—a record of what is, to measure against what may happen in the future—is easier said than done, especially because you often don’t think about a need for one until the damage is already done.

The Deepwater Horizon oil spill precipitated a wave of science trying to understand the impacts of the event on the ecosystem, including the need to find out what existed before, said Patrick Schwing ’06, Ph.D., a visiting assistant professor of marine science at Eckerd College. With support from the Center for the Integrated Modeling and Analysis of the Gulf Ecosystem (C-IMAGE), a scientific collaborative of 17 institutions that have published 250 papers on the spill’s impacts, Bryan O’Malley ’13, a graduate student and lab technician at the University of South Florida, worked with colleagues over five years to try to determine the past quality of the marine ecosystems with the help of some single-celled organisms.

O’Malley’s work—“Development of a benthic foraminifera based marine biotic index (Foram-AMBI) for the Gulf of Mexico: A decision support tool,” co-authored by Schwing, Professor of Marine Science and Geosciences Gregg Brooks, and Marine Science Research Assistant Rebekka Larson ’01—will be published in the January 2021 issue of Ecological Indicators.

Scwhing said it took five research cruises collecting seafloor core samples spanning the entire Gulf from Florida to Mexico to Cuba to gather enough foraminifera, tiny organisms that eat organisms that feed on plant material. Crabs and shrimp are its natural predators, so it’s only a couple steps removed from human dinner plates. 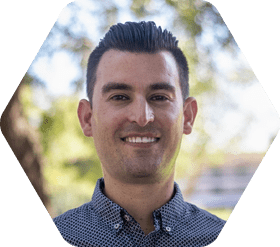 “The Gulf of Mexico (GoM) is an economically important region (e.g., oil and gas, fisheries); and with the expansion of oil drilling, harmful algal bloom events, oil blowouts, dead zones, anthropogenic eutrophication and contaminant loading, it is important that the ecological quality statuses (EcoQS) of different localities in the Gulf are closely monitored,” O’Malley wrote.

FOBIMO, short for foraminifera biomonitoring, is an international working group dedicated to developing and standardizing methods to establish benthic foraminifera in environmental monitoring. Both the North Atlantic and Mediterrean have had such studies completed, and the Gulf of Mexico is the world’s third body of water to establish this type of EcoQS, Schwing said.

“Many Eckerd students and recent graduates contributed to this work in the field and in the lab. This also was an international effort with colleagues from the National Autonomous University in Mexico and the University of Fribourg in Switzerland,” Schwing added.

Now with baselines in place, scientists will better understand the impacts of a number of human and natural stressors on the marine environment just off Eckerd College’s shores.