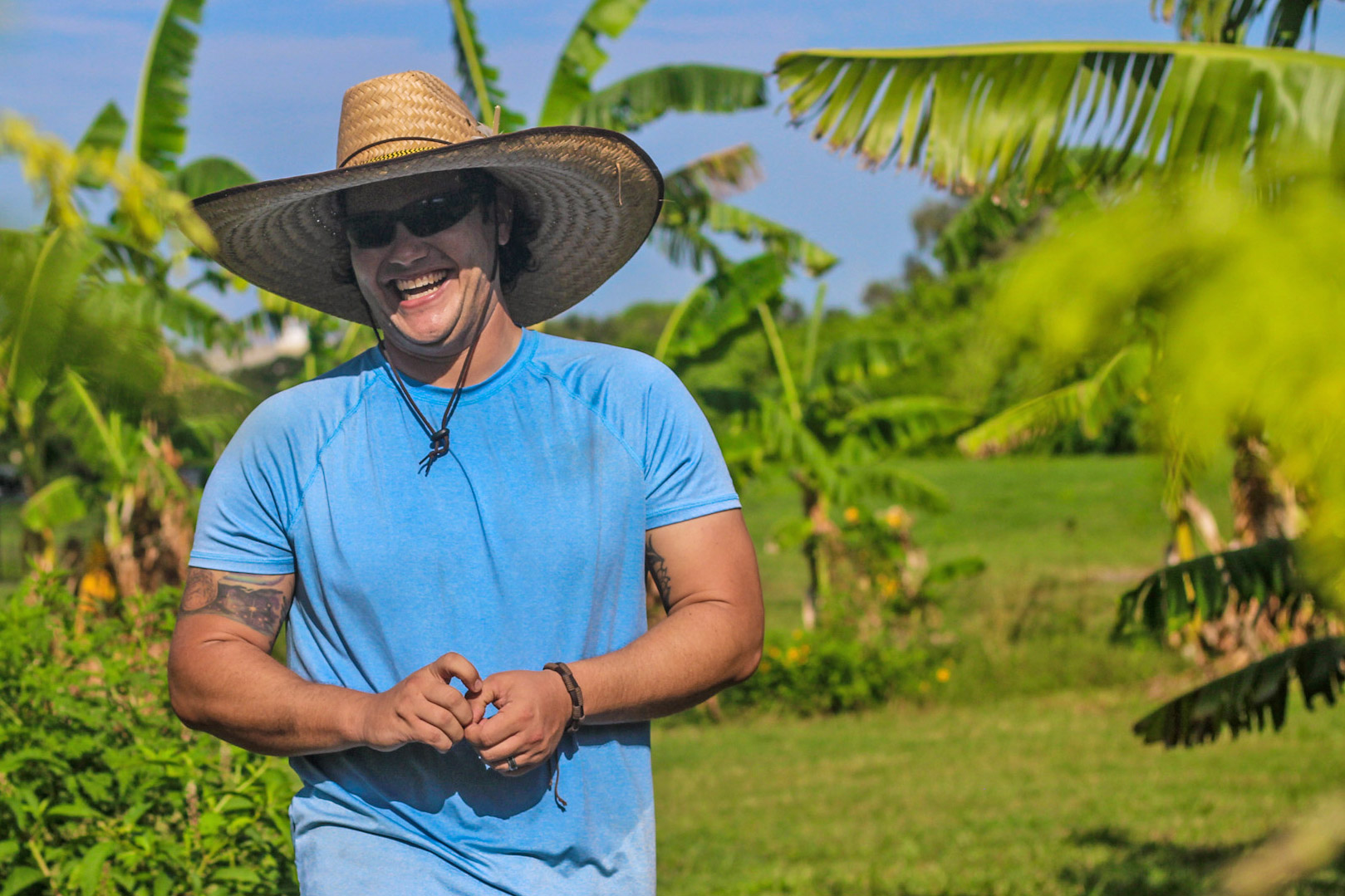 Jonathan Prieto, affectionately known as Farmer Jon, smiles brightly as he braces himself for the bitterness of the handful of leaves he’s pulled from a Moringa tree.

As the new Eckerd College farm manager, he was pleasantly surprised to see a few “tree of life” plants scattered across the one-acre garden he’s been tasked with turning into a working liberal arts farm.

“It’s usually very bitter, but the greens [of the Moringa] produce all the vitamins you need,” he says before taking a bite. His eyes widen with surprise then shine with relief at the taste of leaves much sweeter than anticipated. Farmer Jon surmises that the heavy rains of the previous two weeks must have helped the flavor.

It’s this enthusiasm, combined with what feels like an encyclopedic knowledge of every weed and buzzing thing, that makes others buy into Farmer Jon’s vision for the future of sustainability at Eckerd.

“He’s been really great, and he is always showing me new plants I had no idea I could eat,” says Eliza Hensel, one of the garden’s compost managers and a senior environmental studies and animal studies student from Highland Park, Illinois. “He’s a book of knowledge, and I’m so glad Eckerd has hired someone with the time and attention to push this farm forward.” 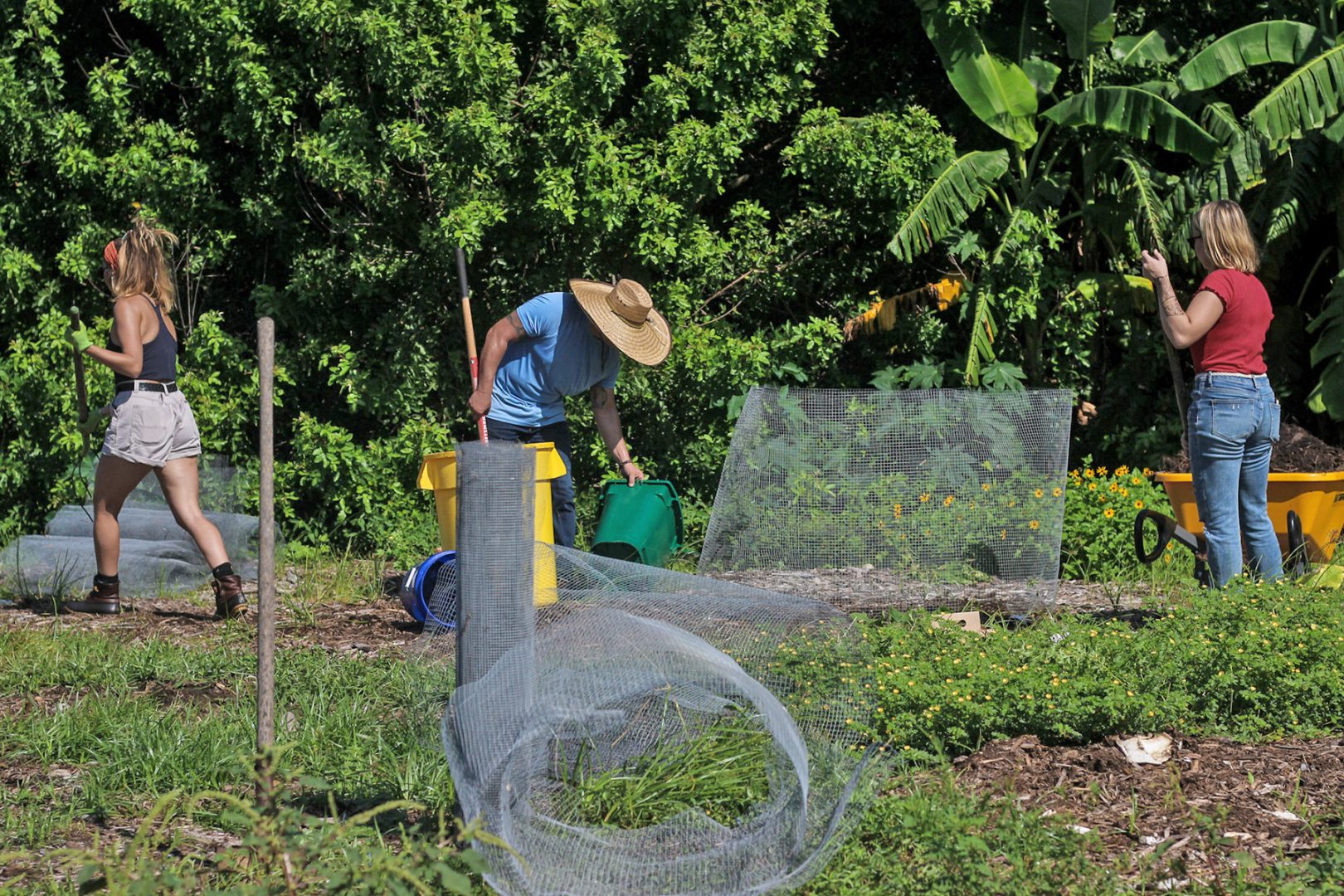 Seniors Kylie Litaker and Eliza Hensel work with Farmer Jon in the garden.
Photos (above and below): Angelique Herring ’19

The journey for Farmer Jon—a Bryan, Texas, native—to Eckerd College wasn’t a straight line, but every stop added a level of preparation. He joined the Marine Corps out of high school and became a Korean linguist before a knee injury sidelined his plans for deployment and earned him a discharge. Using college funding from his service, Farmer Jon went home to Texas A&M University to study plant and environmental soil science—making sure to learn the ins and outs of traditional food production while he continued to experiment on the side.

Along the way he developed an enthusiastic demeanor that makes even standing in a bug-filled garden, eating tree leaves on a 90-degree day seem like a natural choice.

While working as a program coordinator for the University of Florida/Institute of Food and Agricultural Sciences Extension in Largo, Florida, Farmer Jon was invited to present to an Eckerd Winter Term class called the Science of Gardening, taught by Assistant Professors of Environmental Studies Hilary Flower and Jesse Sherry.

“Lots of Florida gardening and landscaping focus on ornamentals because of the conditions and lack of soil in the region,” he explains. “People who work with me know my passion for edibles because I love empowering people to grow food.”

Farmer Jon’s relationship grew with the Environmental Studies discipline to include more lecturing and even helping students with internship placement. As plans solidified for the Eckerd College Farm, an instructor reached out to him to spread the word about the open position. “It was exactly the job I was looking for when I moved to Florida. I told him, ‘I can share it, but I absolutely want to apply,’” he recalls. 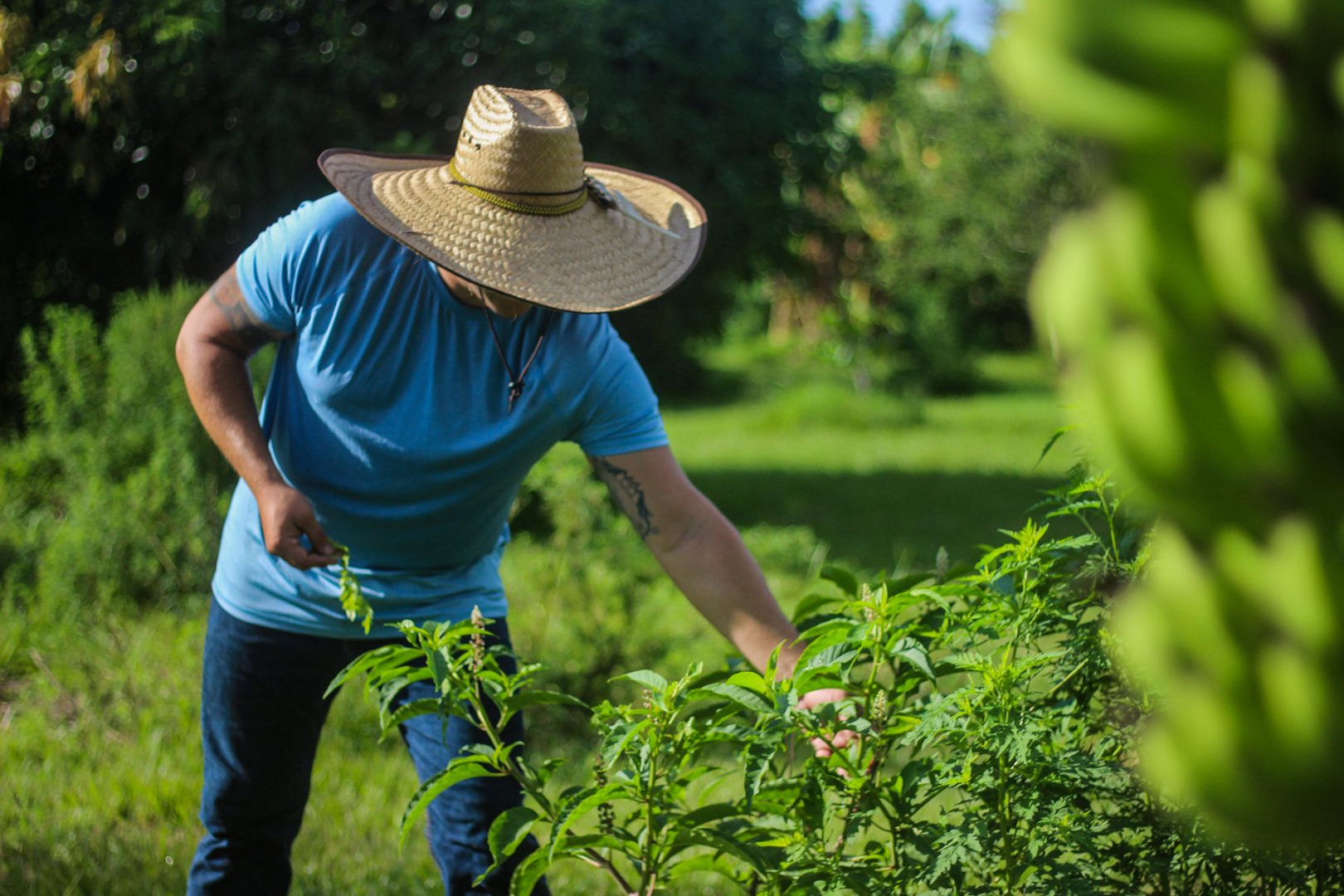 Since starting on-campus July 1, Farmer Jon has led the charge to clear 3,500 square feet of invasive weeds—Brazilian peppers and castor beans—from the edge of the garden and mulch the area to create a clear space for the composting program.

Kylie Litaker, another student compost manager and a senior environmental studies and interdisciplinary arts student from Hickory, North Carolina, is thrilled to be working with someone as passionate as she is about sharing information with others on the environment, though she prefers documentary film. “I believe that environmentalists’ efforts should be global and communications is the key,” she says. “I’ve already learned so much from [Farmer Jon] about Florida native plant species, and I’m sure there is a lot he can learn from us as well.”

To prepare for fall, Farmer Jon has cleared three 4×40-foot garden beds in preparation, managed the racks in the banana tree grove and dreamed of what this one-acre tract will look like in the future.

“There is so much food we can grow here, but it is a matter of shifting North American palates from the traditional things they are used to,” Farmer Jon opines. “The climate is changing and subtropical plants will be easier to raise. Those are your bananas and mangoes instead of your traditional apples. This place offers a great opportunity to change minds about food.”