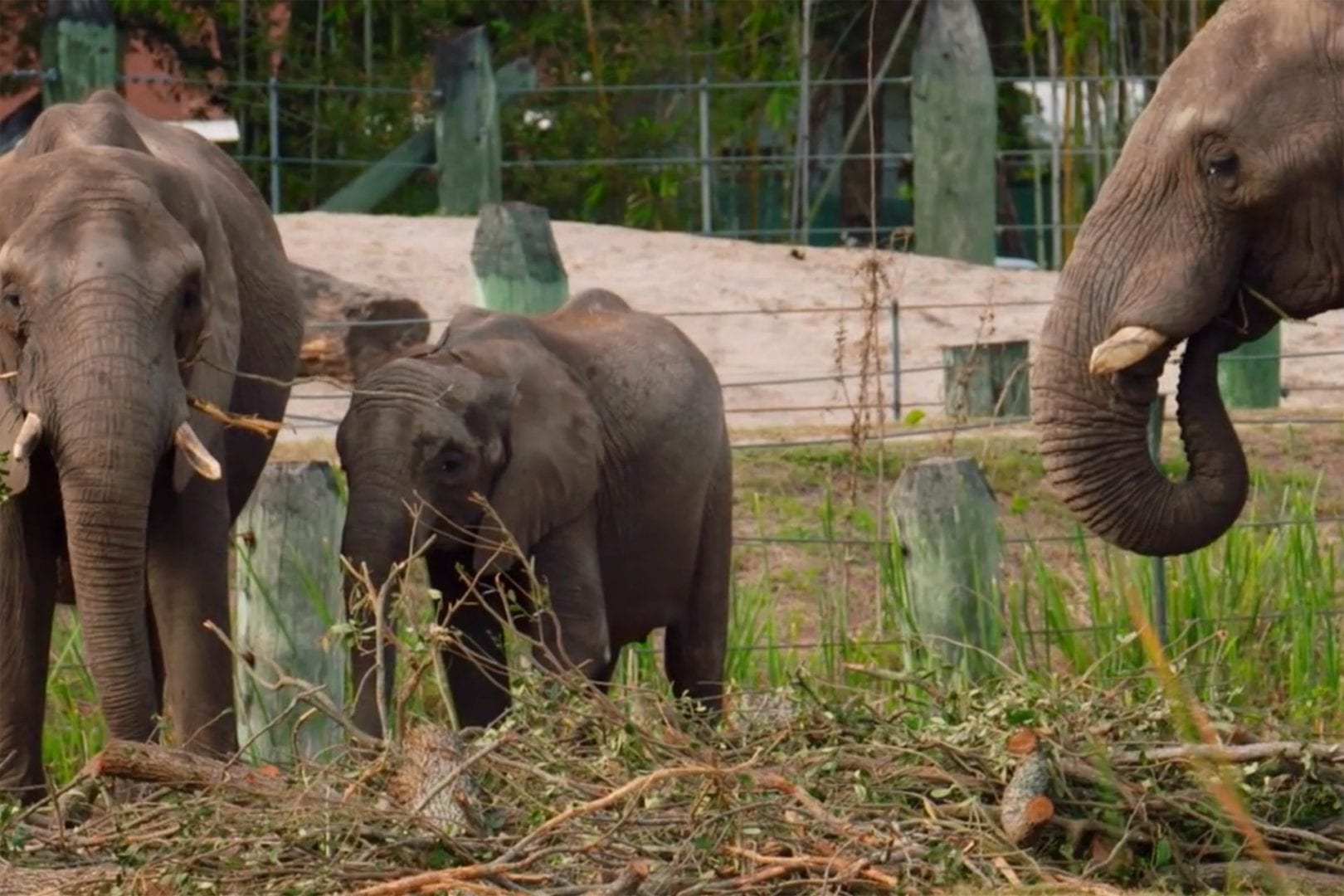 Two African elephants at ZooTampa at Lowry Park, Matjeka and Mpumi, are featured in the segment.

It was just a five-minute segment in the National Geographic show Secrets of the Zoo, but Professor of Psychology and Animal Studies Lauren Highfill, Ph.D., beamed when she saw the footage.

Keepers at ZooTampa at Lowry Park highlighted Highfill’s three-year study of elephant cooperation by demonstrating a trial between two of the zoo’s six African elephants, adult female Matjeka and adolescent Mpumi. Both animals were offered a rope to pull a sled. If they pulled at the same time and similar speed, the sled would move forward and deliver a treat of their favorite fruits and vegetables. If they didn’t match their timing, the rope would come undone and they would get nothing at all. On the first trial, Matjeka and Mpumi succeeded eight out of 10 times, an improvement of 10% over their last attempt. The second time, they improved to 10 out of 10.

“I’m very happy that it was featured on Secrets of the Zoo,” Highfill said. “Letting the zoo guests see this research happening could help them understand the reason the animals are endangered or threatened in their environments. The more people understand, the more people tend to want to care for them.”

Highfill has worked on several other studies at ZooTampa, including a different cognitive study involving elephants in the past. During a presentation at a conference, zoo colleagues were intrigued with Highfill’s assertion that cognitive research, especially about cooperation, is actually good for the large animals. The zoo administrators joined forces with the Animal Studies Research Collaborative at Eckerd College, a campus lab run by Highfill and colleague Assistant Professor of Animal Studies Erin Frick, and the elephant cooperation study was born.

“This is definitely what I am meant to be doing because I have no problem with watching 20 hours of video of elephants,” Maddie laughed. In the process, she’s also built bonds with and picked favorites among the animals. “I was worried about Mpumi at first because she wasn’t doing so well, but over time she improved and now she is doing great,” Maddie explained.

Lead researcher Kayla Fulkerson, a junior animal studies and psychology student from Keystone, Colorado, manages a group of students who watch the elephant cooperation trial videos and record the data on ethograms.

“I absolutely love watching the videos of the elephants to see their progression, because they’re brilliant,” Kayla said. “I have learned that they are just like us. It’s so cool to see them work together to solve the problem and cooperate, and this teaches us more about how they possibly work together in the wild.”

Seeing their elephant demonstration on the National Geographic show, which is now streaming on Disney+, was a real shock for the students. “I never dreamed I would ever be connected to anything Disney-related,” Kayla laughed. “I really appreciate how they portray all the good that happens in zoos. Showing research like this can help the public better understand the type of work that goes on to help better understand and aid animals in the wild.”