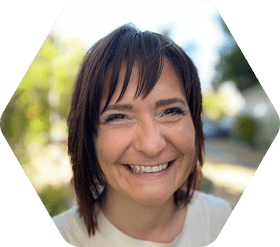 Antonia Krueger, Visiting Assistant Professor, Ph.D. in Theatre from The Ohio State University, where she was the first person in theatre ever to be awarded the highly competitive Presidential Fellowship, for her dissertation research on the career of actress Jessica Tandy. She has an M.A. in Communication (Theatre) from Indiana State University, and an M.A. in English as a Second Language (focus in Psychology) from the University of Minnesota. She has worked in theatre and film as a dramaturg, playwright, theatre critic, voice and text coach, actor, director, costumer, and arts administrator. Her auto/biographical performance project Pucelle was produced by the Expanded Arts Theatre Company in New York City. She was a founding company member for the Great River Shakespeare Festival (GRSF) in Minnesota, where she served as the first Education and Administration Coordinator, and she was a founding judge for the Theatre Tampa Bay professional theatre awards. She is a member of the American Society for Theatre Research (ASTR), and of the Voice and Speech Teachers Association (VASTA). Among the courses she teaches for Eckerd are Performance and the Environment, Animals and Performance, and Oceans in Performance. Current creative and research interests include animal aesthetics and internatural media.