Why Political Science at Eckerd?

Political Science can be defined as the study of the way in which communities of people try to solve problems which are of mutual concern. Of primary interest to the political scientist are the theory, practice, origin and development of the state, government and other political institutions, both in this country and elsewhere in the world. Political scientists are concerned not only with governmental institutions at the national and international levels but also more broadly with political purpose, process and policy, both as they are and as they should be.

The political scientist, therefore, is interested in the distribution of power in society, the legitimacy and structure of government, the decision-making or policy-making process, the content of those decisions or policies, and how people and states attempt to resolve economic, social and political conflicts. Political science in the United States is generally conceived of as having four subfields:

With American government and law, the political scientist specializes in the politics of one country, the United States, studying executive, legislative and judicial institutions and relationships; interest groups, political parties and voting behavior of citizens; law and the administration of justice, and the policy-making process.

With comparative politics, the political scientist would specialize in comparing these political institutions, actors, laws, and policies across countries such as China, Russia, or Germany, or regions such as Europe, Africa or East Asia.

With international relations, the focus of study is on states and international organizations, which are the actors that form an interdependent yet largely anarchical society, and where diplomacy and law or violence and war determine the outcome of international disputes.

Purposes of the Political Science Program

Be sure to check out our Law and Justice minor and pre-law pre-professional program. 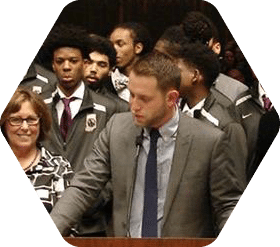