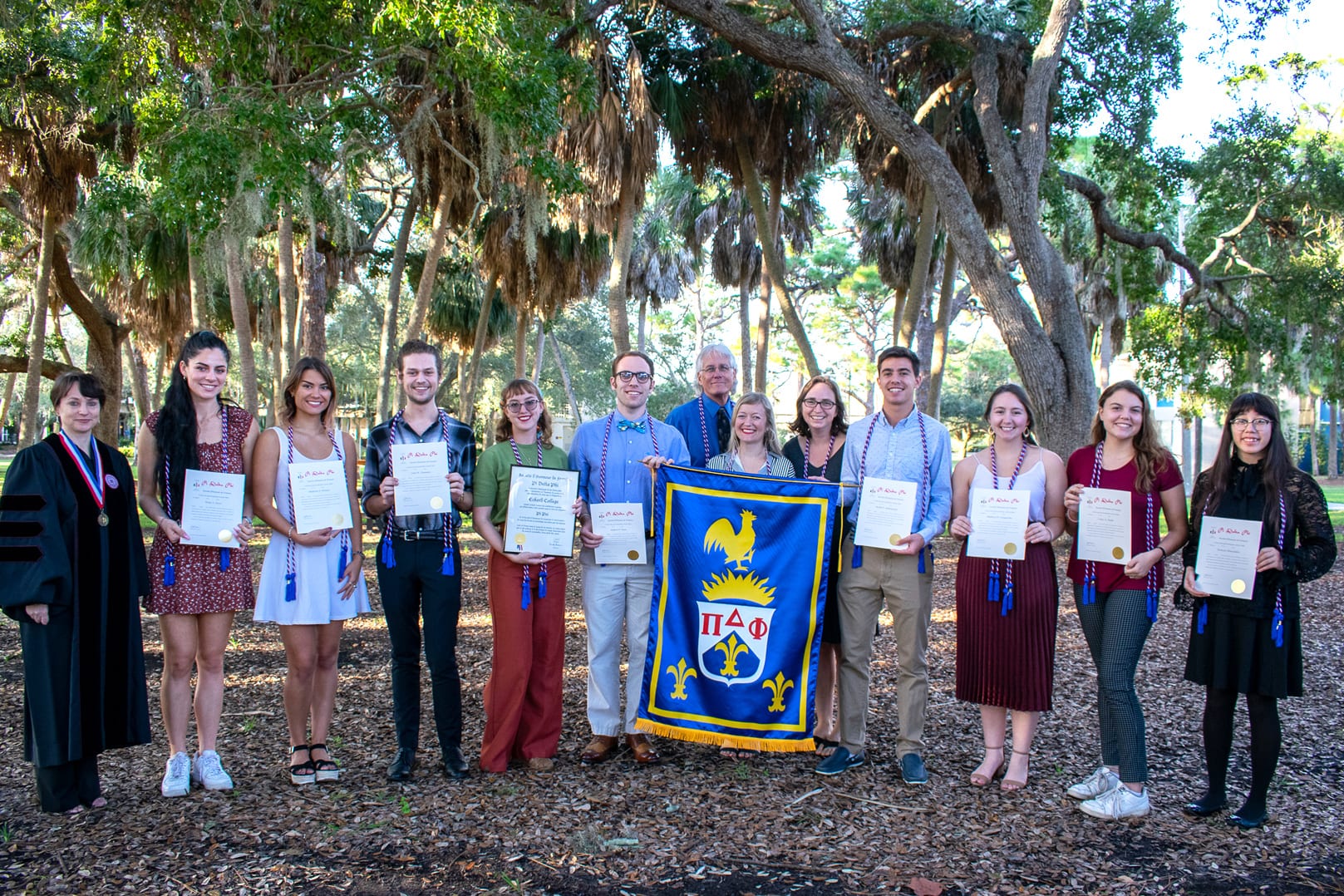 Ten Eckerd College students and three professors joined the ranks of French language scholars from across the nation as the first members of the Pi Psi Chapter of the Pi Delta Phi French Honor Society during a formal chapter installation ceremony on Friday, Nov. 22.

Held in the President’s Dining Room on campus, the ceremony was conducted by Pi Delta Phi’s regional vice president, Olga Amarie, an associate professor of French at Georgia Southern University. Amarie presented the chapter charter to Eckerd College’s Assistant Professor of French Kathryn Bastin, Ph.D.; honor cords to the senior students being inducted; and honor society pins to all 13 inductees.

“It’s really full circle for me,” said Bastin, who was one of the three faculty members inducted. “I trained with [Professor Amarie] when I was a graduate student in Indiana, so to have her be the person to install the 405th chapter is an honor.”

Student interest drove the pursuit of an Eckerd chapter—particularly since Spanish and Japanese language students already had their own honor societies. Virginia “Ginna” Kilbourne, a senior marine science and French student from Staunton, Virginia, made the initial inquiry about an Eckerd chapter with the national organization and was instrumental in helping to plan the installation ceremony where she was also inducted, Bastin said.

“Ginna did such an amazing job,” Bastin recalled. “When she asked me if this is something that I would be interested in doing, I said I would love to because I think it is an excellent opportunity for our students.”

Although in 2019, Eckerd College has only four students who have declared French as their major, Bastin says the numbers don’t reflect the reality of the zeal for language learning at Eckerd. To be inducted into Pi Delta Phi, a student must be in the top 35% of their class, have a 3.0 overall grade point average and a 3.0 in French or francophone studies. One must also have completed a French course beyond the intermediate level (the minimum general education requirement at most liberal arts institutions). This year, nine students in addition to Ginna were inducted: Stefan P. Anthopoulos, a sophomore marine science student from Phoenixville, Pennsylvania; Bostony Braoudakis, a junior marine science and French student from Braintree, Massachusetts; John W. “Will” Dismukes, a senior creative writing and French student from Savannah, Georgia; Madison D. Gumprecht, a junior psychology and French student from McHenry, Illinois; Andrew P. Haan, a human development student from Acton, Massachusetts; Sloan A. Jarvis, a junior international relations and global affairs student from Easthampton, Massachusetts; Madeline S. Morgen, a junior international relations and global affairs student from Minnetonka, Minnesota; Anastasia F. Sapirstein, a senior communication student from Alexandria, Virginia; and Casey A. Smith, a junior environmental studies student from Dunedin, Florida.

“Last year, we had two French majors, and this year we have four,” Bastin explained. “Doubling the number of majors in a single year gives me great confidence in the future. The addition of this honor society will also continue our momentum.”

Bastin was intrigued about what opportunities a chapter would bring. To establish a chapter, a college must offer a major or minor in French or French studies, or a related major or minor in Romance or modern foreign languages or global or international studies, etc., that requires students to complete a minimum of two advanced-level courses taught in French. In addition to a pin and honor cord, student members gain access to scholarships—including the chance at a summer language immersion program at the American University of Paris—and networking opportunities with academics and language scholars. When Eckerd was granted a charter, two of Bastin’s colleagues, Assistant Professor of French Ashley Scheu, Ph.D., and Professor Emeritus of French Lee Hilliker, Ph.D., were inducted as well.

Founded at the University of California–Berkeley in 1906, Pi Delta Phi stands as the oldest academic honor society for a modern foreign language and, according to its website, membership is the highest academic honor in the French field.